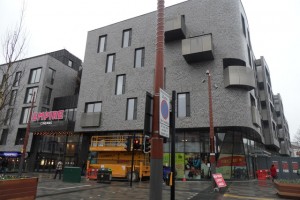 The building at the heart of Walthamstow’s regeneration project won awards, but its management is in chaos according to residents.  Walthamstow Scene is a mixed development with restaurants and a multiplex on the ground floor and residential units above – some let by Islington & Shoreditch Housing Association, and others sold as leasehold.

The developers, Hill Housing Group, scooped four awards, including Best Development and Best Partnership Scheme, yet the ongoing management of the leasehold properties is virtually non-existent and appears to involve more buck-passing than partnership.

Waltham Forest council set up Walthamstow Scene Ltd to run the project, and prospective leaseholders were promised access to its board, and were led to believe council members would remain on it. The company was incorporated in July 2014 and has one director, Keith Hanshaw, who was then a councillor but is rumoured to have left recently. In March 2015, Stiles Harold Williams LLP, with a registered address in Brighton, were appointed as Company Secretary.

Leaseholders paid their first year’s ground rent of £300 to Walthamstow Scene in April, but later the same year a company by the name of Dorchester, who the leaseholders believe owns the head lease,  also sent involces for ground rent, this time for £600. Invoices for service charges are issued by Stiles Harold Williams, but residents say they rarely reply to emails or calls about servicing problems.

There have been numerous maintenance problems – faulty hot water and heating, sewage finding its way into the lift shaft and faulty closure of main doors and gates creating security problems.

And because some debris unaccountably entered the main boiler, every flat needs its water system filters cleaned fortnightly until it “works its way out of the system”. The belated tarmacing of an external area led to tarmac being walked into the hallways and the need for replacement carpet tiles. Despite all this, the only organisation which responds to leaseholders calls for help is Hills, the developer.

Furthermore bi-annual window cleaning has only been done once after a lot of complaints. The leaseholders have asked to see the accounts for Walthamstow Scene but have had no reply as yet and are considering withholding service charges.

On 17 December the council agreed to sell its freehold interest in the site, leaving the leaseholders even more uncertain about who has responsibility for the management of the property.