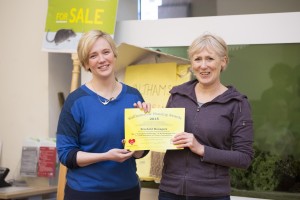 On Saturday Freehold Managers won an outrageous behaviour award for its opaque and unchallengeable terrorism cover. The awards, organised by the E17 Housing Action Campaign, were based on votes by local people and aim to highlight the best and worst players in housing provision across the borough. Winners included letting agents, estate agents and social housing providers, and there were three special MP Awards for outrageous behaviour. Full list here.

The infamous terrorism cover levied on Warner flats is in most cases £70 per annum per year, although people in nearby E10 pay only £37. When residents asked for the total number of flats on the block policy, in order to get a comparative quote, they were refused, on the grounds that this was confidential information. What’s more they do not know how terrorism is defined, or what is and is not covered. A few years ago a resident who questioned the cost was sent a news cutting about an arrest made in Walthamstow on charges of suspected terrorism and told “that’s why you’re paying this”.

At the awards presentation in Walthamstow Library Stella Creasy MP said she now gets more requests for help on housing than any other issue. And several local people spoke movingly about housing situations that would stretch anyone to breaking point. The stories illustrated a perfect storm of housing scarcity, landlord abuse and letting agent indifference. Afterwards, about 30 people filed around the corner to Hoe St. to present the best (The Stow brothers) and worst (Central) estate agents with their certificates!