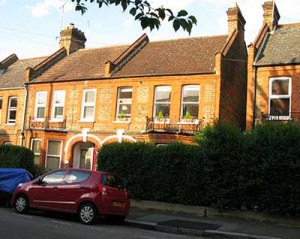 Waltham Forest council have launched a consultation on a proposed conservation area around Lloyd Park. What are the pros and cons? On the plus side it means your neighbour would need permission before painting their home in candy-stripe stripe colours like this Kensington resident, but would it mean a mountain of red tape to paint a front door or prune a tree?

The proposed area includes the four streets to the west of Lloyd Park – Winns Terrace, Badlis, Diana and Mersey Road, with a possible future extension to Carr, Fleeming and Elphinstone Road. The broad ambition to preserve the unique character of the Warner properties in the area probably resonates with most Walthamstow residents. But how would it work in practice? The proposal says “examples of works requiring permission would include changing windows and front doors, re-roofing and altering chimneys, cladding or rendering external walls, laying out a hard surface in the front garden or altering boundaries”.

Under the original Warner management all front doors had to be a regulation green (Brilliant green, obtainable from just one supplier). But do we want to go back to that level of conformity? The glass in the original door panels is quite brittle, and today doors normally use toughened glass for safety reasons. What happens when aesthetics come up against safety? Or sustainability?

Double glazing keeps homes warm, reduces energy bills and carbon emissions. But uPVC seems to be a bête noir amongst conservationists. I asked the council’s urban design department for advice. They hedged their bets, pointing to timber and aluminium versions that are comparable in price, and better looking, but they haven’t yet drawn up specific rules. Loft extensions would still be permitted, with Velux windows to the front and dormers to the back. But they struggled with solar panels, “I honestly don’t know at this stage.”

It may be the idea is just too late – so many properties have already replaced windows, doors and roofs it would seem unfair to prevent future residents doing the same. Maybe the council could try an approach that’s more carrot and less stick. List preferred suppliers of doors and windows that meet both conservation and sustainability aims on their site. In return for the publicity, ask the suppliers to offer a discount on Warner properties.

When we look at the history of the Warner flats we find they were built as affordable housing. It would be ironic if residents’ maintenance bills were inflated in the name of preserving the original character of their homes.

Consultation lasts until 15th June and there will be a public ‘drop-in’ session in the Acanthus Room, William Morris Gallery on Weds 3rd June from 4 – 8pm.